According to Many the Most Beautiful Gorge in Iceland 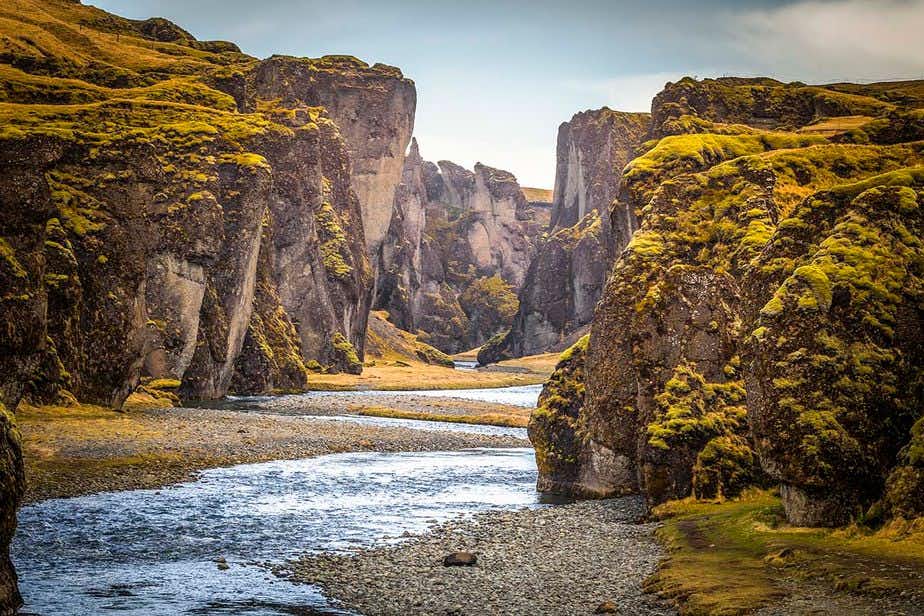 Fjaðrárgljúfur is a remarkable canyon in Iceland. This canyon is rugged and exactly what you expect from this island. The gorge in the south is easy to visit. Put on your hiking boots and discover it for yourself. These are the best tips for your trip.

No tourist knows how to pronounce the name. Still, Fjaðrárgljúfur is a famous green canyon in Iceland. The Fjaðrá River flows through an extremely rugged landscape. The gorge is about two kilometres long and reachable on foot. The rocks are about 100 meters high. You can also see several waterfalls due to the height differences. A visit to the Fjaðrárgljúfur gorge is one of the highlights of your tour.

Once you see the pictures you will understand. Although there is also a chance that you know this landscape from the music video for Justin Bieber's song I'll Show You. His video clip resulted in a sharp increase in visitors to the canyon. As a result, the gorge had to be closed for a few months to limit further damage. A footpath has now been constructed so that no further erosion can occur.

You will see strikingly steep rocks at a river that meanders through the landscape. The rocks are dark, with green vegetation. The landscape is different around every corner, making it perfect for hiking as an excursion.

View of Fjaðrárgljúfur in Iceland.

When you arrive, stop and oversee the landscape at the entrance. It immediately gives you a good idea of what to expect. This is already one of the best places for a photo. Just wait and see; you will see that this setting is often used online or in publications. So don't walk passed it too quickly, but enjoy the view.

The Fjadrargljufur waterfall is very beautiful. The hiking trail takes you to the waterfall. You can only view it from above, but that is very impressive. The water meanders between the rocks. Perfect for pictures.

You have several options. Recently, the government of Iceland has created a hiking trail over the rocks. With several viewpoints. This path is about 2 kilometres long. Parts of the canyon have also been closed off to protect nature.

For a long time, you could also walk through the river. Where you had to partially wade when the water was a bit higher. This was not dangerous. In fact, it was a wonderful adventure. Although the water is very cold. You will find the latest information about the possibilities on site.

In the spring and part of the summer, the grass is green. And so you see the dark rocks with green vegetation. In the autumn the grass turns brown. Which makes the atmosphere in the gorge a lot grimmer. And photographers will come especially for that moment. In winter, the gorge is often difficult to access, but it does make for spectacular photos with snow and ice.

Geologists have discovered that Fjaðrárgljúfur Canyon arose in a special way. The layer of rocks consists of soft rock, but also hard magma. After the last ice age about 9,000 years ago, Iceland became warmer. Thus a large lake was created at the beginning of the gorge. The water that fell over the edge ran into the chasm, and scoured away so much soft sand. But the walls of the lake broke, sending a great torrent of water through the canyon. It slowly sanded out the chasm. If you walk around the canyon you can see with how much force it must have happened.

A sheep in Fjaðrárgljúfur in Iceland.

What is the Location of Fjaðrárgljúfur?

This green gorge is located about 6 km west of the town of Kirkjubæjarklaustur. It is about 250 kilometres from Reykjavik. The place is easy to reach. Follow the road to Laki and keep left when you see Holtsvegur. Then you will automatically see the parking lot.

Faxi Waterfall
The Faxi waterfall in Iceland is not so well known. Maybe because it has multiple names, such as Faxifoss and Vatnsleysufoss. Most people drive past it when driving the island's famous Golden Circle. This is a shame as this waterfall offers you to experience the violence of water up close.
Read more
Gullfoss

Gullfoss
Gullfoss waterfall is one of the most popular waterfalls in Iceland. A large amount of water falls into a gorge of 32 meters deep, but it is mainly the amount of water that is impressive. In addition, this waterfall is easy to reach. The Gullfoss is located on the Golden Circle on the west of the island. Here are the top tips and sights of the waterfall.
Read more
Hjálparfoss

Hjálparfoss
Hjálparfoss is not one of the most famous waterfalls in Iceland. It is also not one of the largest, highest or any other special water features. But it is worth a visit because it is a double waterfall. It is also stunningly situated between basalt blocks making it look beautiful in every season. In addition, it is located next to the road near the famous Golden Circle. So a stop is quickly made.
Read more
Kerid Crater

Kerid Crater
Kerid Crater is one of the many volcanic craters in Iceland. It is located on the famous Golden Circle in the southwest of the island. You can easily visit this wonderful crater. There is a hiking trail around the crater, as well as a trail to the beautiful lake in the middle. These are the best tips and sights of Kerid Crater.
Read more
Seljavallalaug

Seljavallalaug
Seljavallalaug is one of the oldest thermal pools in Iceland. It was built in 1923 to teach the locals how to swim. Even now you can swim in the warm spring water. Although it is actually not that warm. Either way, the hike towards and the view at the scene make up for a lot. You can find Seljavallalaug near Skogar, in the southern part of the island.
Read more
Solheimajokull

Solheimajokull
Solheimajokull is a glacier in southern Iceland. This glacier is beautifully located on a glacial lake and is relatively easy to reach. It is also one of the most popular glaciers on the island for a glacier walk. You do this excursion with an experienced guide. Discover below the best tips with all its sights for Solheimajokull.
Read more

all 19 articles on Iceland