This city is Canadian and yet also French 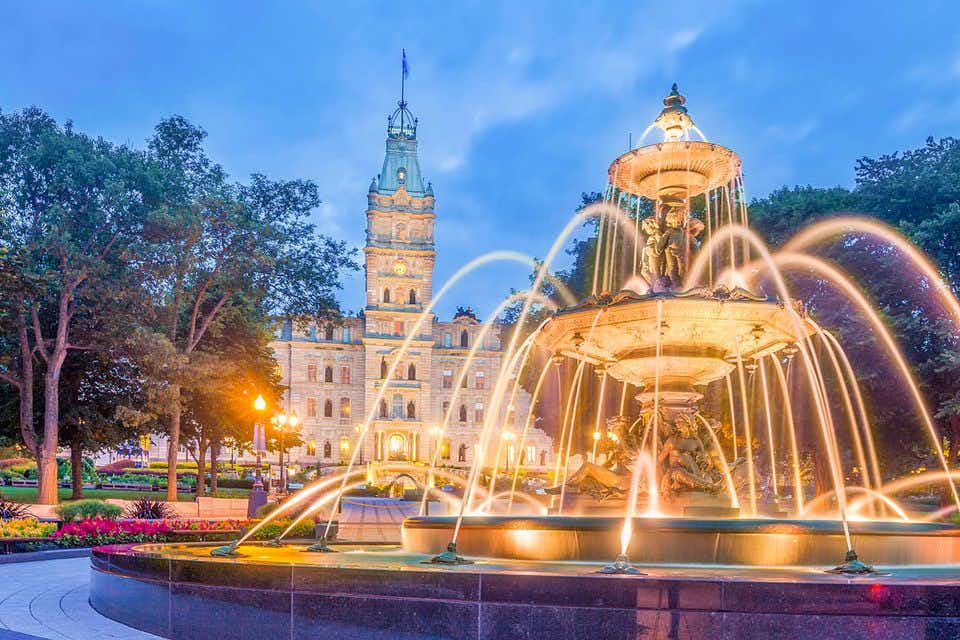 The city of Quebec has got this vibe. It’s the best way how I can describe it. The atmosphere, its legacy and the people who live here. You can walk around here in a relaxed way in a nice mix of Canada with a strong French influence. Where you hear French and English interchangeably everywhere.

Few cities are beautiful in every season. And Quebec is one of them. You can wander through the small streets in the old city center. And, in the evening, go out for dinner in one of the many restaurants.

When you walk around Quebec, you will automatically see why you are actually on two continents at the same time. Also in terms of architecture, things are constantly mixed up in Quebec. Special is that it is the only city in North America that is surrounded by a city wall. It is also the capital of the French-speaking province of the same name.

All in all, this is one of the best-preserved colonial cities in the world. With various wonderful city parks and lakes. Where you can start or end your journey through Eastern Canada. It is a city where a day is far too short for a visit. Discover the best attractions and things to do for your visit.

The Old City or Le Vieux-Québec

The Old City of Quebec.

The historic center, with the beautiful name le Vieux Québec, is on the World Heritage List of UNESCO. Le Vieux-Québec is the colonial and very impressive city center of Quebec. It has been remarkably well preserved over the centuries. Les Remparts is the high city wall and fortifications. The western part of the city wall in particular is still intact. When you walk around here you feel like you’re half in Old France.

The old town is divided into Haute-Ville (Upper Town) and Basse-Ville (Lower Town). Haute-Ville used to be the living quarters for the higher social classes, such as nobles and priests. Basse-Ville, on the other hand, was the residence of the common people. The houses here are much smaller and if you walk around here you can easily get lost in the many narrow streets.

To get here you can take the steep stairs Escalier Casse-Cou. Which is a nice challenge. Easier is the funiculaire, a funicular railway between Rue Petit-Champlain (Basse-Ville) and the Terrasse Dufferin (Haute-Ville).

The Old Fort or La Citadelle

La Citadelle is a special star-shaped bastion. It is one of the largest fortresses in North America. Construction started in 1673 and was completed in 1690. Besides the fact that you can wander around here, you have a wonderful view of the city.

In the summer months, you can watch the changing of the guard here at ten o’clock. Because part of the fort is still used by the Canadian army. You have to buy a ticket, which also gives you access to the museum with military historical objects. And, if you want, you can take a tour of the Old Fort.

Whoever sees this building will think; what a beautiful castle. And especially when you hear the name. But that’s not it. It is a luxury hotel designed for the Canadian Pacific Railway. The hotel is beautiful to see anyway, especially from the outside.

If you walk around here, take a look at the Terrasse Dufferin. This is a wide boulevard along the St. Lawrence River. This is a very happening place in the summer. Think of various street performers and artists.

Quebec’s Old Port is still a wonderful place to stroll around. Including the historic train station and a 50 km (!) long hiking trail from Quebec City to Montmorence Falls. Québec Public Market is also special, where you can buy all kinds of fresh fruit and vegetables, but also have lunch.

The interior of the Notre-Dame-de-Québec.

Quebec Cathedral, or Notre-Dame de Québec, is imposing. It dates from the 18th century. This is the oldest seat of the Roman Catholic Church in North America. Striking are the stained glass windows on the left and right.

But the most special is the crypt. This was once Quebec’s first cemetery. More than 900 people are buried here, including twenty bishops and four governors of New France. You can only visit the crypt through special guided tours.

The Place-Royale is the oldest part of the city. As well as the part that has the most European appearance. This is the place where explorer Samuel de Champlain founded a fortress in 1608. Which, according to the history books, is the very first permanently inhabited French settlement ever in North America.

In the Musée de la Place-Royale you can get a good impression of the past of the city as well as the first inhabitants of Quebec. Here you will also find the small Église Notre-Dame-des Victoires, which dates from the end of the 17th century. The Maison Chevalier is famous for its architecture. This house from 1752 is open to the public.

Things to do in Quebec

Quebec has a real toboggan run (rodelbahn) in the middle of a city in winter. From mid-December to approximately mid-March you can go down at the Terrasse Dufferin. This track is more than a century old, making it one of the oldest toboggan runs in the world. Here you can speed down at speeds of 70 km per hour.

What is the best time to travel to Quebec?

You can visit Quebec all year round. The days are a lot shorter in winter. But you can skate on the rivers here. And there is a special toboggan run.

Spring starts in May. The weather is often nice and there are also various festivals.

Summer is perfect for discovering Québec. Often with nice sun and long days. This period is the most optimal in terms of temperature. Then you can often sit here in the parks and terraces.

Autumn is the best time for nature lovers. Think of the Indian Summer, and remarkably mild weather.

The beauty of winter in Quebec.

Winter means that there is often snow in Quebec. It gives the city a different atmosphere. Especially during the holiday season. You can also ice-skate and do other winter sports here.

How to travel to Quebec?

Québec, like Montréal, Toronto, and Ottawa, is a perfect starting point for a tour of Canada. You can also land in one city and then take off from another.

Niagara Falls
The Niagara Falls is a once in a lifetime experience. You must hear and feel the water, as well as experience its brute force. It is useful to prepare your visit in advance to get the optimal experience. And visit the waterfalls in Canada and in the United States. These are the best tips for Niagara Falls.
Read more
Northern Lights

Northern Lights
The Northern Lights; a must see with your own eyes at least once in your life. This spectacular phenomenon of dancing curtains are also referred to as Aurora or Aurora Borealis.
Read more
Pan-American Highway

Rocky Mountains
The Rocky Mountains are a mountain range in the United States and Canada. It is home to numerous famous national parks. But there is more to discover, much more. The rugged nature in particular appeals to many people. Which will quickly make you feel insignificant.
Read more
Yoho National Park

all 20 articles on Canada