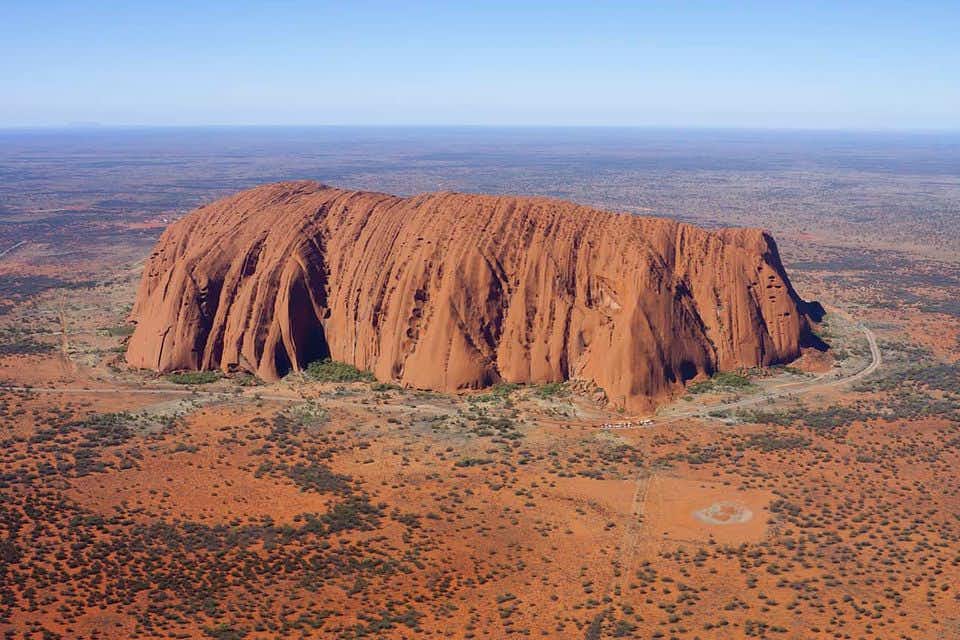 Uluru, also known as Ayers Rock, in Australia is perhaps the most famous rock in the world. It's a brightly coloured monument in the middle of the desert, a remnant of what was once upon a time an ocean.

This huge rock has two names: Uluru, the original name the Pitjantjatjara Anangu people gave it, and Ayers Rock, a name that white settlers gave it, but is no longer actively used. It is both a symbol for its rich cultural history and modern tourism, right in the middle of the semi-arid desert.

The numbers of Uluru

Uluru itself is the most popular attraction in the Uluru-Kata Tjuta National Park. This huge rock formation is around 4.5 km long and 2.5 km wide. Its highest point sticks up around 248 meter out of the landscape. It’s been known as the world’s largest ‘monolith’ on earth, a formation that is made up entirely of one rock.

Climbing Uluru is prohibited from October 2019

Tourists climbing on Uluru before 2019.

From October 26, 2019, the Australian rock Uluru is closed to climbers. This means that you are no longer allowed to climb the rock via the well-known steep path. That has been decided by the board of the Uluṟu-Kata Tjuṯa National Park. The reason is multiple.
To the Aborigines, the rock is sacred and many of them find it disrespectful to climb it. That is why there have been signs not to do it for years. In addition, the rock is worn out by the many people who want to climb on it. Now that is over, because you can no longer climb it.
Uluru has plenty of other sights to visit. I have been there for several days and enjoyed this unique place. I have also done various excursions, did some hiking and had a delicious meal and drink with a view on Uluru. These are my tips for Uluru.

The lovely colours of the sunset at Uluru.

One of the highlights is seeing the sunset at Uluru. The already red rock then turns even redder. Which produces spectacular photos. It can get busy though, so find a quiet spot. Grab a drink, sit down and enjoy the view.

The wonderful sunrise at Uluru.

I think the best moment is actually not sunset, but sunrise. Or dawn, the moment just before. Bring some coffee or tea to see how the first rays of the sun illuminate the rock. This has several advantages. First, it is perfect for photos. Second, most other tourists are still asleep.

Mutitjulu is a small Anangu community near Uluru. The people who live there are co-managers of the national park. You can go on guided tours around the area from this village, which will show you how the local people have lived in this region for centuries, and what Uluru and Kata Tjuta means to them.

While Uluru is world famous, Mount Conner is surprisingly relatively unknown, despite the fact you can see it from the road to Uluru. It’s also three times bigger than Uluru, 859 meters high. This huge tabular mountain is located 88 kilometers from Uluru. Scientists think that this mountain is part of the same rock plateau as Uluru and Kata Tjuta. Its shape is remarkably different to Uluru, though it is still a mystery why. Scientist did discover that it’s about 200 to 300 million years older than Uluru. Mount Conner is named after M.L. Conner, an Australian politician who did a lot for the pioneers that moved inland in the 19th century.

A hiker at Uluru.

There are several walking tracks around the rock, which are ideal if you want to go explore and take photos. It’s best to go in the morning or late afternoon, when it’s cooler and quieter.

The Mutitjulu Waterhole at the Kuniya Walk.

The Kuniya walk is very rewarding. It's a small hike to the Mutitjulu Waterhole, a small waterfall in this extremely dry landscape. It's only a short walk, but a must on your visit. If it has been dry for days you will not see a waterfall, but you will see the well. There are often birds seen, so wait a while.
It can get very busy. The best time is sunrise, lunch time and sunset. The Kuniya Walk starts at the Kuniya Carpark.

Hike with an Anangu guide

You can walk around Uluru with an Anangu guide, who will show you how they live in this dry part of the world. They will also share their dreamtime legends and history with you, a lifestyle that is different to how many people see the world. There are several kinds of tours available.

A thorny devil at Uluru.

Uluru is located in a semi-arid desert, often referred to as the Outback, in the heart of Australia. It is home to many different kinds of animals, like dingoes, red kangaroos, pink cockatoos and the wedge-tailed eagle. But you can also find the thorny devil, or the strange perentie. Keep your eyes open and ask at the visitors’ center about the best places to spot them. A good time to look for animals is early in the morning, to avoid other tourists.

Valley of the Winds Walk

It is the most highly regarded hike in the area: The Valley of the Winds. This 7-kilometer route is known for its many vistas. At the same time you get close to the rocks to get a good view. And listen to the wind whispering along the rocks.

Stargazing with the Anunga people

The local Anunga people have a different view of the world to many people, and this includes the night sky. You can spend a night learning about their interpretations of the stars, which play a central role. It’s something to behold. Their stories and way of life will stay with you for years to come.

Have a toast at Uluru.

Known as the Sound of Silence Dinner, you can sip champagne under the stars and indulge in local bush tucker, such as kangaroo and emu, while you can hear the sounds of a didgeridoo in the background.

Tip of the mountain

Research has shown that Uluru is only the tip of a huge mountain range, that also encompasses Mount Connor, 100 km away. And possibly even Burringurrah (formerly Mount Augustus) in the west of Australia. This is almost twice as big as Uluru, but scientist don’t agree on whether it’s a monolith. Their discussion and research continues.

This mountain range also contains the 30 rocks that make up nearby Kata Tjuta, (formerly known as The Olgas), which is another favourite with tourists. Mount Connor, a tabular mount about 100 kilometers north of Uluru, is not as popular. Surprisingly, it doesn’t get that much attention from tourists.

The history of the rocks is very interesting. For millions of years, the weather elements deposited sediment everywhere. But around 900 to 550 million years ago the land was flooded and a shallow inland sea was formed. The pressure of the water’s weight compressed the sand and boulders on the seabed into rock formations.

Around 350 million years ago there was a strong upward pressure that brought the sandstone rocks up, and folded them at the same time. In the following millions of years, sediment (like sand and gravel) was deposited and much of the rocks disappeared under the sediment, with only the very tops visible. You can easily see the layers of sediment in the rocks. It’s incredibly to realise that you’re there looking at the remnants of what was once a sea when you’re standing at these rocks in the semi-arid desert also known as the Outback.

Both Uluru and Kata Tjuta will eventually disappear entirely. Erosion will slowly eat away at the rocks, including the rain and the streams that creates, and the extreme temperatures between day and night. During the day the temperatures average between the 30 and 40 degrees Celsius, while at night it hovers below the freezing point. During the day the rock expands in the heat, and at night is shrinks in the cold, day in, day out.

It can be very busy at Uluru in peak season. It’s quieter in August, just before spring starts.