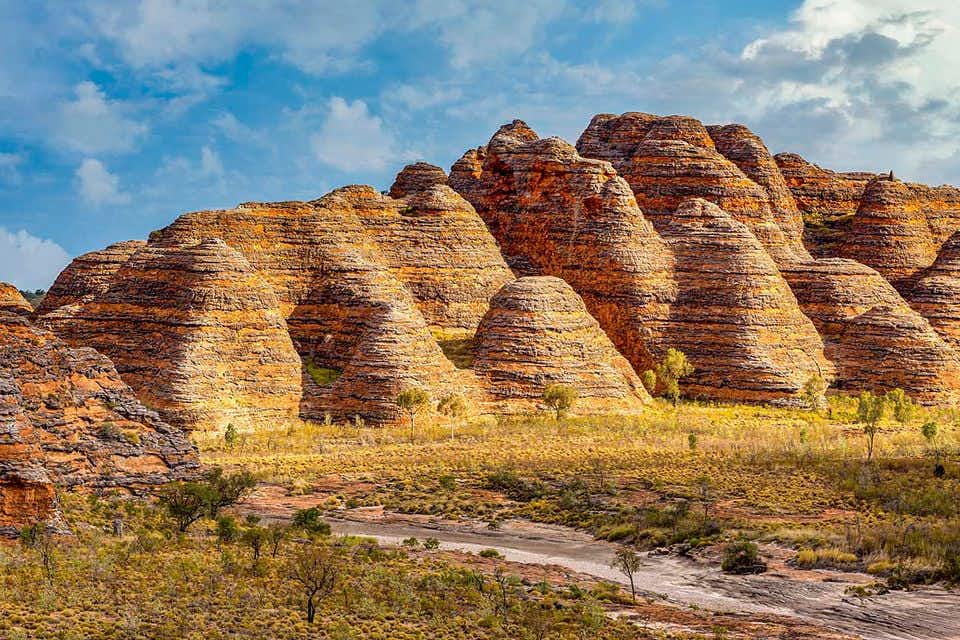 Purnululu National Park is one of the lesser known natural areas in Australia. The landscape has a number of special sights. Many of the rocks in this national park uniquely resemble a beehive. The rocks are in the shape and colours of beehives.

The park is located in the North East of Australia and is famous for the 300 meter high quartz sandstone formations. Since 1987, Purnululu National Park is on the UNESCO World Heritage List. You can easily visit Purnululu, although it is not really on the standard route for tourists through Australia. It is a wonderful park for hiking, it is also possible to make various excursions.

These rocks are unique. According to scientists they were formed around 375 million years ago, probably caused by the impact of a meteorite. This area is known as one of the final real wildernesses: The Kimberley. It’s also an area where you can learn a lot about the history of the local Indigenous peoples.

The name of the national park where these rocks are is Purnululu NP, it comes from the Aboriginal Gija language and means fretting sands. The western people called the rocks the Bungle Bungle Range, or simply Bungle Bungles, supposedly after grass that grows that is locally known as bundle bundle. But, as is custom in Australia now, many culturally significant places are mostly known by their original names in the indigenous language of the region.

Echidna Chasm is a steep gorge in Purnululu. A walking route has been set out. This is 2 kilometers long and can be done in half an hour to 45 minutes. You walk past wonderful palm trees, where the gorge changes with every step.
The walk starts at the Echidna Chasm car park. This is located about 19 kilometers north of the visitor center. The best time for this hike is early in the morning. Then you can see how the sunlight falls into the gorge.

The famous Cathedral Gorge in Purnululu.

Cathedral Gorge is a 4-kilometer hiking trail. It leads to a famous point in the middle of the rocks. Where you are surrounded by steep high rocks. The departure point is Piccaninny Creek Carpark.

Mini Palms is a wonderful walk. Where you occasionally have to climb over stones and take narrow passages. You also have to take two flights of stairs between the palm trees to get to viewing points.
Mini Palms is actually a must. The walk is 4.4 kilometers long. You can do it in an hour, but take three hours for it. There is plenty to see. And this is a good place for a picnic.

How was this landscape created?

These rocks in Purnululu NP are an interesting phenomenon. The surface is mostly made up of sandstone and sediment consisting of several sources, mostly sand and gravel. Erosion has cut the rocks out of this surface over many centuries; especially the softer sandstone is sensitive to it.

The hard core underneath remained, but also the layers of sandstone between. The result of all these years of sculpting by Mother Nature are these remarkable bumps, resembling old-fashioned beehives. The different layers create a stepped effect, which looks almost unnatural.

Some of the bee-hives in the park.

The remarkable colours of a bee-hive

Remarkably, it’s not just the domed shape that resembles a beehive, the colours also help with this impression. The steep slopes are marked by even horizontal lines in orange and black: the harder parts are the orange colour caused by iron and manganese, and the black lines are on rock that hold moisture better.

Biologists and geologists have spent years researching the black colour in particular. It appears the black lines are caused by billions of cyanobacteria that live in and on the rock. These micro organisms cannot live on rock that is too hard, so there is a clear line visible between the two different kinds of rock where they can and can’t live. They also protect the rocks from further erosion.

This area was relatively unknown until 1982, when a small plane was used to take aerial photos of the rocks, which created an interest in the region, especially with those who like adventure. A small stream of tourism started, but even now many tourists find the area too remote.

The area has a lot of significant historic rock paintings and burial sites of the Gija peoples. Thanks to these rock paintings, scientists know that this area has been inhabited for at least 20.000 years. The Gija and Jaru people are the traditional custodians of the national park.

Just outside the park you can visit the Warmun community with Warmun Art Centre, where you can learn about local culture and art. There is also a roadhouse where you can stay, eat or restock supplies for your journey.

Because Purnululu is located on the border of the tropics and the semi-arid desert, you can find animals from both eco systems. Scientists have found 41 kinds of mammals, 149 kinds of birds, 81 kinds of reptiles, 12 kinds of amphibians and 15 kinds of fish.

Of the mammals, the spectacled hare-wallaby is the most remarkable. They can grow up to 50 centimetres in height and can be recognised by its orange/red rings around their eyes, hence the name. They are spotted regularly, despite being an endangered species.

You can also find the northern nail-tail wallaby. Though the chance you’ll see him is quite small, as they are nocturnal animals. The best time to try to spot them is at dusk and dawn.

Other animals that are sometimes seen by walkers are the common wallaroo and the short-eared rock-wallaby, the latter is more, not surprising, often seen near the rocks.

The Australian grey falcon is frequently spotted in the grasslands, though it is believed there are only around 1000 of these endemic birds left.

You will see the budgerigar, commonly known as budgies, and if you haven’t see them yet, you will definitely hear them chattering first. They fly in big flocks around the area, and land to look for seeds on the ground. The original budgerigar is green with black spots on its chest.

Another colourful bird is the rainbow bee-eater, which is often spotted sitting on branches.

There is relatively little rainfall, so plant growth is limited. The hardy spinifex grass is the most common vegetation in the lower areas.

In the springtime the wattle is in bloom, as well as the grevillea, or spider flower. These bright flowers add a lot of colour to the landscape.