Best place to see the dingo and with nice beaches 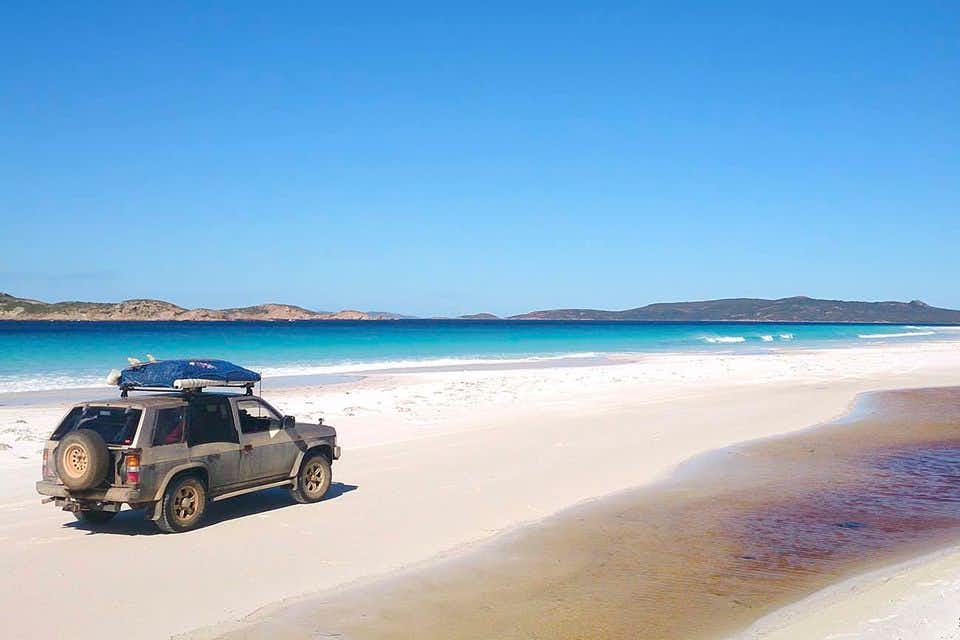 Fraser Island is a unique island on the eastern side of Australia. It is the largest sand island in the world. But it has a very diverse landscape. With several lakes, mangroves, tropical rainforest and eucalyptus forests that you can discover. And this is where Australia's predator, the dingo, lives. Which are easily spotted. But you can also encounter countless other wildlife.

The island is 122 kilometers long and 5 to 25 kilometers wide. Which is big enough for a (small) tour. Fraser Island is part of the Great Sandy National Park, which also protects the mainland. Since 1992, Fraser Island has been on the UNESCO World Heritage list.
Whoever goes to Fraser Island will be amazed. It has a number of special attractions and mouth-watering excursions. You can visit this island well in combination with the other islands in the area like I did. These are the best sights of Fraser Island.

The stunning colours of Lake McKenzie.

Lake McKenzie is one of several lakes on Fraser Island. But this is probably the nicest. The water is so incredibly clear that you can see the bottom everywhere. It is a freshwater lake with bright blue water, golden beaches and a green tree edge, and probably a blue sky with a sun. Lake McKenzie is located in the southern part of Fraser Island. There are walking routes, but you can also simply relax. And picnics, for example.

Wanggoolba Creek Boardwalk is a wooden deck walkway through the rainforest of Fraser Island. The walk is only 700 meters long, but gives a good impression of how rough this forest is. You can see the Wanggoolba Creek, a beautiful creek. Watch out for birds and other animals. You will see lots of wildlife.

Lake Birrabeen is also a special lake, but much greener in colour. Although you can also see blue in it. You can swim in the warm water, and then rest on the striking white sand. It's a short walk to this lake.

Lake Wabby is also a lake, but it is much more remote. And is therefore quieter. It has, among other things, famous sand dunes, many of which roll over to the slopes. And yes, it is nice to rinse off all the sand in the water.

Driving on the Seventy-Five Mile Beach.

The Seventy-Five Mile Beach is especially popular with people who like to drive their 4 × 4 on the beach. The four-wheel drive rental cars are allowed on the beach, and it is a wonderful excursion.

The S.S. Maheno is one of several ships that ran aground. The rusting remains are on the beach, and it is a good place for photos. The ship has a special history. After years of service, it was to be sold to Japan. On the day it was due to travel to Japan, it entered a tropical storm. It became adrift and washed up on Fraser Island. You will automatically encounter the wreck on the Seventy-Five Mile Beach.

The green colours of Eli Creek.

Eli Creek is popular for a special excursion. This creek is good for wading through the water, and for cooling off. It is not deep, so you can easily enter the water. You can find Eli Creek close to the wreck of the S.S. Maheno.

Indian Head is famous for its view, and it is a good spot see animals in the clear water. Like rays, but also sharks and sometimes even whales. You also have a beautiful view over 75 Mile Beach. Climb up the hill and sit there with a drink.

The Champagne Pools at Fraser Island.

Champagne Pools is the best place to swim in the sea on Fraser Island. It is also the only place, because the other beaches suffer from currents. And sharks, which frequently come into the water for this. However, this is not the case in Champagne Pools. These are a kind of natural swimming pools between the rocks and the beach.
The rocks protect you from the waves, even if they beat over the rocks. This creates a lot of oxygen bubbles, hence the name of the beach. You'll find Champagne Pools in the northeast of Fraser Island.

The dingo is also often referred to as a wild dog. Its Latin name is canis lupus dingo; the English name is Australian wild dog. But this animal is not like other dogs anywhere in the world.

Scientists have spent much time debating about it, but in 2014 they were declared their own species. The most common belief is that they were introduced into Australia around 10.000 to 3.000 years ago.

It’s likely they came from Asia and are possibly descendent from the Indian wolf. There are also scientists who believe the dingo descents from the original hound.

The dingoes on Fraser Island are used to people, who are sometimes foolish enough to feed them. But you should always keep your distance and allow them space to move away.

A whale shows itself at Fraser Island.

The waters around Fraser Island are also good for whale watching. Whale watching is also very popular in Australia, and you have different types of encounters. Sometimes you only see a back in the distance, sometimes a nice tail that slowly sinks into the water and sometimes they come very close.

How to get to Fraser Island?

Fraser Island is easily accessible from Hervey Bay, Rainbow Beach and Noosa. There are several ferries for both passengers and cars. Please note, only four-wheel drive cars are allowed on this island. The reason is clearly the large amount of sand.

Traveling yourself or a multi-day excursion?

There are several options to visit Fraser Island. You can simply book an excursion for a day. In addition, you have transport to the island, a program and lunch for example. Although you can hardly enjoy the diverse island.
It is also possible to travel to the island for several days. Then you have to take the boat to Fraser Island. This can be done from the popular Hervey Bay, but also from Rainbow Beach. You can take your rental car on the ferry. If you don't have a 4WD, you can rent it for a few days in Hervey Bay.
There is one more option to visit Fraser Island. You can travel around the island with your car in a group. So you don't have to worry about the route, campsites, hostels and more. These tours are popular and easy to book online.

Fraser Island is very popular with tourists, and it can get too busy. Try to avoid school holidays and weekends. If you are going on excursions, go early. So that you are ahead of most other hikers. It makes your chance of spotting special animals much better.